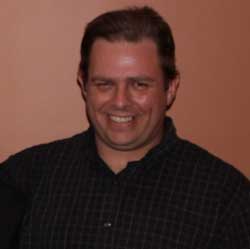 Shawn has been working with computers since 1992. As a kid he would get his dad’s old computers to tinker with. He was 12 or 13 when he really started to take interest and realized he was excelling at working with computers and technology. Naturally he would go to UCF for a degree in Engineering Technology, where he met James. He loves working at Firewall because every day he is presented new challenges. He also enjoys being able to help people make technology work for them. His favorite pastime is disassembling electronics to see how the work and spending time with his twin boys.
“A patient person that enjoys working with technology.”

Roger joined the Team at Firewall in 2014 but his passion for technology goes a long way back. When he was a kid he had a TI99 he would create programs in basic for (if you don’t know what that is, Roger will be happy to explain). He has an AS in Computer Programming and Analysis as well as a BS in Information System Security. He loves work at Firewall because of the nice team and the great clients!
“I like solving problems, which is one of the main reasons I love computers.”

Blake is the newest member of the Firewall Family. With his AS in Social Science and his experience working with IT and technical jobs since 2010 he was the perfect addition. His passion for Information Technology goes back to high school when he first got into Linux and later started building and repairing computers. He enjoys working with different clients and always having a new challenge. No wonder he likes electronics and just generally taking things apart in his pass time as well or he spends it with friends.
“I like learning on the job, and working in IT lets me do that.”

Go Paperless with Your Smartphone

Get rid of the paper that’s cluttering your desk (and kitchen table, and nightstand). It’s time you officially entered the 21st century by digitizing your documents. The best part – you can do it all with your smartphone. You can […]
Read the full article…

Posting fun stickers on your photos isn’t just reserved for Snapchat users anymore. Twitter has released a similar sticker feature that allows you to choose from a wide variety of designs to publish. To use the sticker feature, be sure […]
Read the full article…

How to Donate without paying a Dime!

Load a Long-Lost Website It’s an unfortunate fact of life that some of our favorite webpages occasionally go to the Internet Graveyard, whether the creator didn’t pay their hosting fee or the news site took the article down. However, in […]
Read the full article…

Add Stickers to Your Twitter Photos Posting fun stickers on your photos isn’t just reserved for Snapchat users anymore. Now, Twitter has released a similar sticker feature that allows you to choose from a wide variety of designs to publish. […]
Read the full article…

Charge Your Phone in a Flash

Use This Simple Trick to Charge Your Phone in a Flash Especially when you’re on the go, checking your phone’s battery life may not be the first thing on your mind; but leaving it to die can be crippling, as […]
Read the full article…

Having the right images can make or break any important document or presentation. If you find you don’t have the perfect image saved on your computer, Microsoft Office 2013 and later editions allow you to search through online sources, like […]
Read the full article…

Pokemon Go! Got Your Battery Low? Try this Trick:

If you’ve been hooked on Pokemon Go! since day 1, you’re not alone. This mobile game took the world by storm, taking just 19 days on the market to reach 50 million downloads. But users across the globe have noticed […]
Read the full article…